Greek Mythology is pretty great. It is entertaining, educational, and the myths are full of some bizarre stuff that your kids will love.  I don’t know exactly why children love Greek myths; maybe it has something to do with kids trying to make sense of the world just as the Greeks were, or perhaps it is just good storytelling. There is no denying that before scientific explanations gave us the answers to so much, the Greeks came up with some pretty great reasons for the unexplainable. 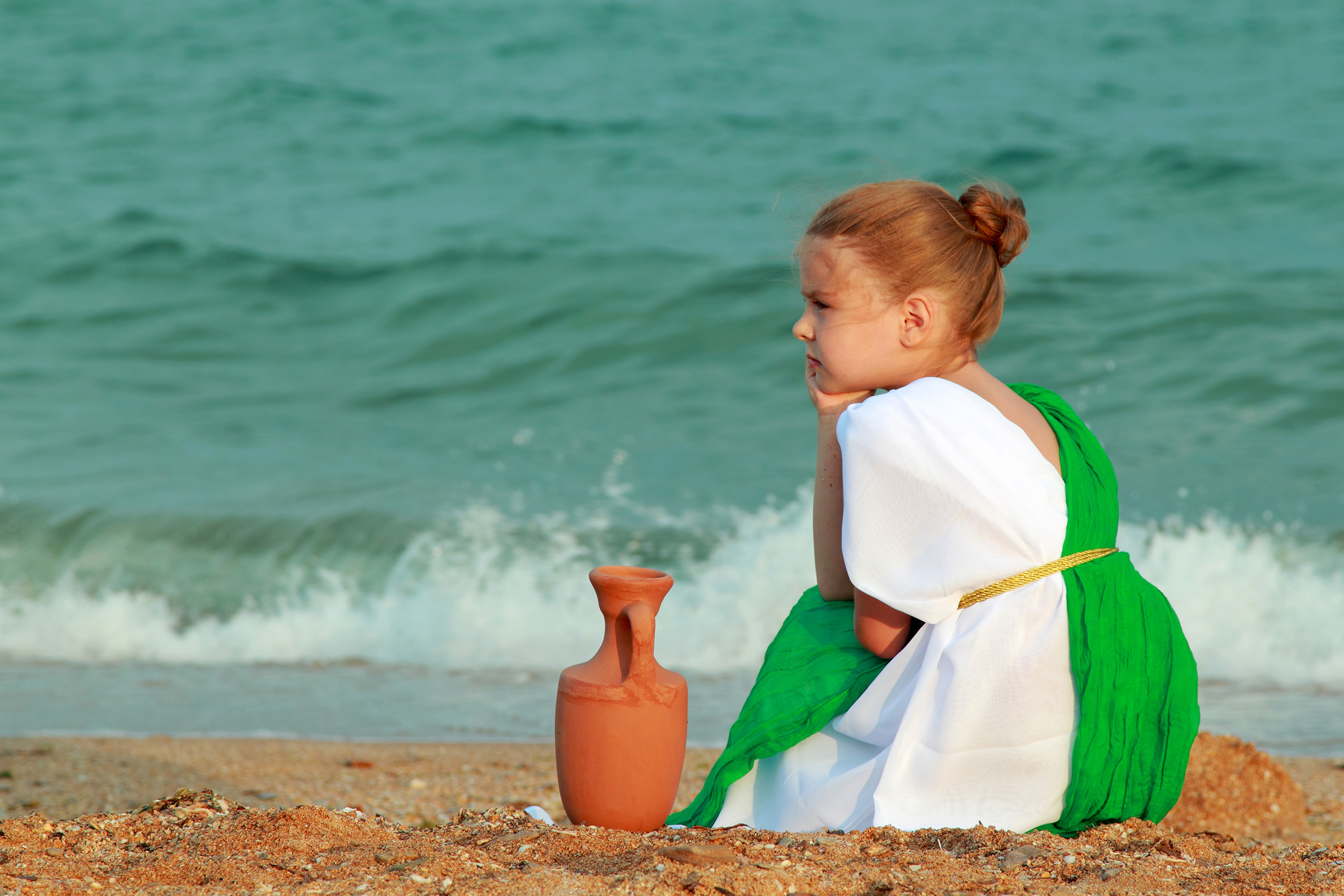 Why does it get cold for four months of the year? It gets cold because Hades kidnapped Persephone, the beloved daughter of Demeter, the Goddess of the Harvests, and took her to the underworld. Demeter was so upset that everything stopped growing. Demeter eventually got Persephone back, but part of the deal she made with Hades was that Persephone had to go back to the underworld for four months a year, and every year Demeter grieves for those four months. Thus, that is why we have winter.

How did the Greeks explain lightening? That is just Zeus getting angry and throwing his thunderbolts around.

Why is there sometimes dew in the morning?  Its Eos the Goddess of Dawn tears.

Although there are plenty of beautiful stories in the myths, a lot of the characters in Greek myology are pretty terrible, and they do outrageous things. With all the patricide, infanticide, matricide, torture, killing, revenge cannibalism, and lots of other awful behavior, you might be wondering how to teach your kids about the myths in a kid-friendly sort of way. We can show you where to start since we have some great books and websites that they will love.

There is a fantastic selection of excellent Greek mythology books that are written for kids. If you are just starting, the book to get is the D’Aulaires’ Book of Greek Myths.  Everyone loves this book (including my six-year-old son and me). This book is fantastic. It was written in 1962 by the husband and wife team of Ingri and Edgar Parin D’Aulaire, and it is considered a classic. With its quirky and beautiful illustrations and matter of fact telling of the myths, it is perfect for children. Some of the language is a bit advanced for younger kids, and you might have to stop to clarify what is going on in a particular myth, but this is an excellent choice to help kids learn about Greek mythology. You can most likely get this book at your local library. If you are looking for a starter book, this is the one to get.

The series that has launched millions of kids into the world of Greek mythology is, of course, the Percy Jackson and the Olympians series. It is for slightly older kids (the recommended age range is 8 to 12), but if you have an avid reader, you could probably go a little younger. This series was written by a former middle school teacher, who mixes ancient mythology with modern adventure, and it is unbelievably popular. If you are looking for a sure thing to get your kids reading and learning about Greek mythology, this is it.

Another author who does a great job making Greek Mythology appealing for modern kids is Joan Holub. She writes the very popular Goddess Girls series and well as the Heroes in Training series. These books are for a younger crowd who might not be quite ready for Percy Jackson. They are easy readers and for kids ages 6 to 10. Goddess Girls deals with the idea of what Greek goddesses would have been like at middle school, so lots of drama ensues. While Heroes in Training is about what the Gods would have been like as ten-year-olds.

Mythology The Gods, Heroes, and Monsters of Ancient Greece (Ologies) is part of the beautiful and top-rated Ology series.  This book is a little hard to explain, but basically, it is a 19th-century textbook that was written but the fictional author Lady Hestia. The textbook has been taken along to Greece by Lady Hestia’s friend, the fictional John Oro, who writes notes in the book chronicling his journey through Greece looking for treasures. This book is jam-packed with beautiful illustrations, cool treasures (including a feather pen!), and lots of information about the Greek myths.

As a bit of a Ken Jennings fan, I have to recommend his Greek Mythology book for kids. This one is for ‘brainy’ kids who want to learn about the wonderful and wacky world of the gods. It is written in a fun and humorous way your kids will enjoy reading, and it has lots of illustrations, trivia, and quizzes to keep your kids entertained.

Since the myths can be a bit confusing and hard to remember, you may want to help reinforce what your kids are learning through online games or websites. Here are a few to have a look at:

Another easy way to help kids learn about the myths could be through Mythic Warriors: Guardians of the Legend. It is a TV series that is a little cheesy, but quite good as far as explaining some of the myths. You can watch the episodes for free on YouTube. It’s an older show made in 1998 that ran for two seasons, and it pretty much covers all your kids need to know about the Greek gods.

Another option is a short Greek Gods video from the History channel. It can sometimes be a bit hard to keep all the Greek gods straight, so if your kids need a little refresher, this is a super short video that gives a good overview of who is who on Mount Olympus.

The History Channel also has a pretty well-known series called Clash of the Gods. It featured stories about Zeus, Perseus & Medusa, Odysseus, Hercules, etc. that is good.  You can watch several episodes for free on YouTube, although this series isn’t appropriate for kids, parents are looking for something to watch it’s pretty good.

If you have any Greek Mythology books or sites that you love, let us know in the comments below.