Teaching Kids The Basics Of Hockey – Even If You’re Not An Expert Yourself.

It’s winter, and for a lot of people, that means one thing: Hockey!

Here in Canada, a lot of kids wind up playing hockey in some form, and why not, kids love playing hockey. They do, however, have to start somewhere. As a wise person once said: The journey of a thousand goals starts with a single puck. (It was me, I said that.)

Whether your kid just plans to play at the local rink with friends, or they want to get into the league system eventually, they need to know the basics. They can take lessons, of course, but even if they do, a little bit of instruction beforehand goes a long way.

Or maybe you want to really get into it, and give them extensive coaching yourself – and why not, it certainly worked for Walter Gretzky. The good news is that you don’t need to be a hockey expert to get your kid started. The amount of videos out there (and other resources) is astounding, and you can get up to speed in no time.

So lace up those teaching skates and keep reading, while we guide you on your journey from the backyard rink to the big leagues. 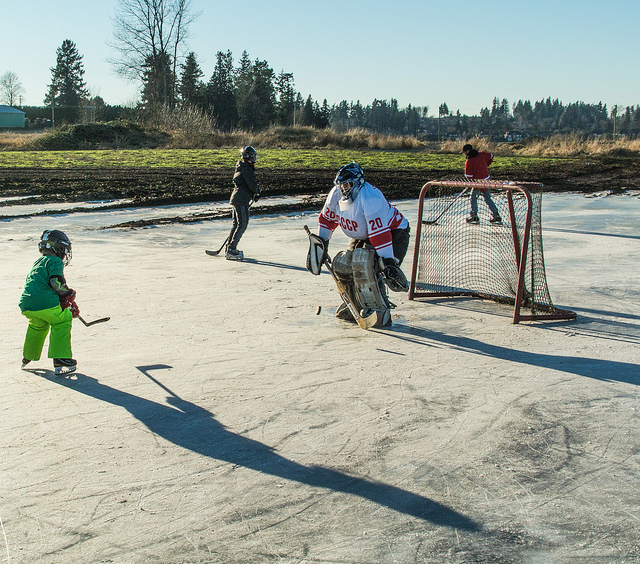 Obviously, the first skill that your child will need is the ability to skate. The main idea is that they’ll want to (eventually) be able to skate forwards and backward. They’ll also need to learn to stop and turn.

Basic Skating: The first place we’re going to recommend for tips is, of course, our own post on How To Teach Kids Ice Skating. We’ve got some good pointers in there, as well as equipment tips.

Stopping: A great way for kids to stop while skating is the snowplow maneuver. You basically just get them to turn their skates towards each other at the toe and push their heels out. Check out this Youtube video for a good demonstration.

Turning: When learning to skate, kids will instinctively learn to turn by using a two-foot glide and leaning into the direction they want to go. This video gives you some simple instructions on turning, for beginners.

Once they’ve mastered turning, kids should move on to crossover turns. These are more advanced turns where the legs – you guessed it – cross over. When your kid is ready to learn these, check this video out.

Skating Backwards: This is one of the hardest skills to learn for smaller kids, especially when holding a hockey stick. A good video on this would be How to Skate Backwards in Hockey.

Puck Control and Stick Handling: Being able to control the puck (also known as Stick Handling) is key to being a decent hockey player. A simple way to work on this is by practicing with a tennis ball. By having a way to do it away from the ice, your kid can get in a lot of quality hours on the road, driveway, or even in the basement. For pointers, we found this training video that has some great stick handling tips.

Passing the Puck: Passing is, of course, an extremely important skill. The best way to learn to pass is visually, and the best video we could find on the subject was this demonstration by Pennsylvania hockey instructor Al MacCormack.

Shooting: There are a few different types of shots in hockey. The best thing for a beginner to learn is the Wrist Shot. We found this very detailed video that should get your kid on the right track. 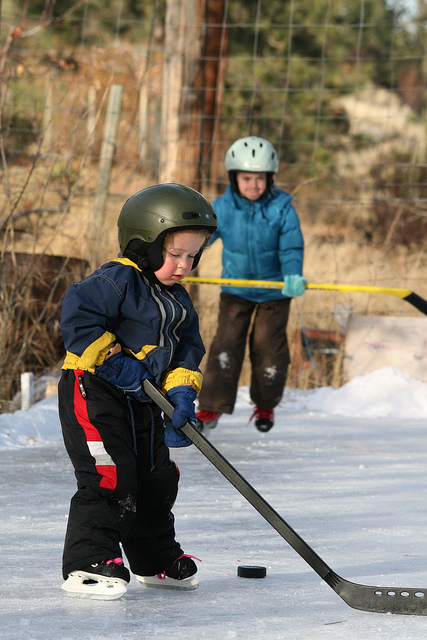 If you are looking for more info about hockey for kids, check out these books: