The Smartest Kids in the World: And How They Got That Way is a fascinating book by Amanda Ripley, that sets out to find out why the United States is doing so poorly on the standardized PISA test (which is given to 15-year-olds around the world and tests them on reading, mathematics, and science.) 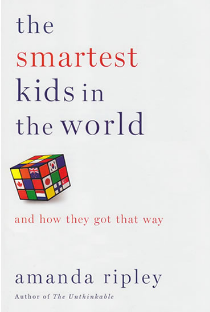 Ripley studies the education systems of a few of the countries that had the best PISA results ( Korea, Finland, and Poland), and documents the experiences of American exchange students in each of the nations. She finds several key points that these countries focus on, to create a top education system.

1. The top-performing countries believe in academic rigor. Teachers, politicians, parents, and kids in these countries agree that school should be about mastering complex educational content. Students are expected to take school seriously, and there are high expectations from teachers, parents, and the students themselves about what the students can accomplish. Comparing the American education system, Ripley writes of several disturbing examples, where education boards seem almost afraid to encourage students to aim for a high academic standard. These boards are scared that a large percentage of the students just aren’t up for the challenge, and will be destroyed by failing.

2. Teachers need to be the best and brightest of society and need to be highly trained. Only the most promising students get into Finnish teacher’s colleges, where they spend six years studying. Students and parents highly respect teachers because they know how difficult it is to become a teacher. Getting into a teacher training school in Finland is as prestigious as getting into medical school in the U.S. Ripley provides lots of examples that prove that when the teachers are highly educated, the quality of the teaching goes up.

3. Factors that people assume to be important to student outcomes, like government spending per student and private education, had little effect on academic performance. Poland is a particularly good example of the lesson that more money doesn’t necessarily make a great school. After education reforms in Poland, polish students outperformed the U.S kids in math and science despite spending less than half what the U.S did per child.

4. Investment in classroom technology doesn’t equal better academic outcomes. Of the schools profiled in this book, there was little or no technology available in the classrooms. Many of the most successful education systems don’t even allow students to use a calculator in class.

5. Failure wasn’t considered shameful, but a normal part of learning.  Students who were having difficulty with schoolwork were given the best help available until they caught up. In Poland, students were graded on a 1 to 5 system (lowest grade being 1, and the top a 5.) An American exchange student in Poland observed that when students’ exam scores were announced in front of the class, no one ever got a 5, and none of the students seemed too bothered about it. “If the work was hard, routine failure was the only way to learn.” Ripley uses examples to compare that to the American system and shows that many educators believe failure in American schools is demoralizing, and to be avoided at all costs.

6. Math skills are vital in the modern world, and more value must be placed on math education in schools. Math is a very strong predictor of future earnings, with math skills becoming more and more valuable in the global economy. Ripley laments the pervasive idea in the U.S. that math is an innate ability, and that you’re either good at it or you aren’t. As a counterpoint, the education superpowers treat math as a skill that is developed through hard work and perseverance. These countries believe that with the right teachers, who have strong math training themselves, children’s math scores will improve. This is because there is a strong relationship between a teacher’s ability in math and the student’s results.

A Finnish teacher needs a master’s degree in math to teach. In North America, many teachers have liberal arts-based backgrounds, and they aren’t necessarily as strong in math. Because math lessons build upon what has come before, if a student doesn’t understand a particular concept, it’s easy to fall behind quickly and become discouraged. In high performing countries, children are not allowed to give up on math, as they are in American schools. It is regarded as a skill that must be learned.

7. Teaching higher-order thinking and reasoning is critical. The Smartest Kids in the World spends a lot of time stressing the importance of math in schools, and reminding the reader that math isn’t just math: “Math is a language of logic. It is a disciplined, organized way of thinking. There is a right answer; there are rules that must be followed.” Since more and more jobs are requiring these kinds of skills, kids need to be able to adapt and be prepared for the modern job market.

8. No education system is perfect, but they are dynamic and can change quickly. Ripley writes, “Everywhere I went, in every country, people complained about their education system.”  She says this is a universal truth. Of the three countries examined in this book, some lessons can be taken from all of them about changes that can be made. One of the big lessons is that it’s possible to make radical changes to education systems that will improve student outcomes in a relatively short period.  Poland is an excellent example of this. Despite high rates of crime and poverty, the government rolled out dramatic education reforms in 1999. The PISA tests were able to show the test scores from the old education system in Poland in 2000, and then after the reforms were in place in 2003. In only three years, the PISA scores went up dramatically for the Polish students, to the point that they were able to catch up to all of the developed countries in the world and surpass the U.S. within a few years.

9. What parents do at home to help their kids matter more than what parents do at school to help their kids. The common idea in North American society is that the more involved a parent is with their child’s school, the better the child will do at school. Ripley, however, found that volunteering or fundraising for the school has little or no effect on children’s PISA scores. Her research showed that what’s more important is very simple: reading to kids every day when they are young and then engaging them in conversation as they get older, about things that matter, and will get them thinking. Getting kids to become strong readers and thinkers is strongly influenced by what the parents do at home, not at school.

10. There is more than one way to become an education superpower. Finland, Poland, and Korea all have very different systems. Finland’s approach appears to be ideal, with the key being the highly trained and carefully selected teachers. Poland’s approach has some great lessons on how to make dramatic changes to education quickly. Korea’s system, despite its exceptional PISA scores, is probably not the one that other countries should be aiming to emulate. Ripley goes into great detail about what a typical Korean student’s day is like, and it seems pretty horrible. Kids attend a regular school for lessons, but after school, when most American students would head home, many Korean students stay until about 9 p.m. and clean the school, study, take extra exam prep classes and watch online test prep videos. After they leave school, they go to private tutors until 11 p.m. These kids are living in the classrooms for up to 12 hours a day, and they do nothing but study. Even the Minister of Education in Korea doesn’t think the Korean system is deserving of all the praise it’s getting from other countries.

If you are interested in education and what it takes to make a great system, The Smartest Kids in the World: And How They Got That Way is a great read and well worth picking up.

***The appendix of the book includes advice for on what to look for when choosing a school: